Home » The Church of St Helen 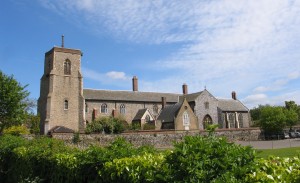 St Helen’s is an ancient church in the Cathedral Quarter of Norwich which has been a place of worship for the Great Hospital community for hundreds of years. The Great Hospital was founded in 1249 by the then Bishop of Norwich to care for elderly homeless people. The first to be helped were “decrepit priests”.

When the church was originally built, it was a hive of activity giving solace to the inmates of the hospital who could see from the wards into the chancel as Mass was celebrated. The Great Hospital was not then as we think of hospitals now, it was a place of refuge and 404 Not Found

hospitality for the poor; education was also provided for some poor boys of the area.
Now, the Great Hospital is a highly regarded community for older people and it is also a beautiful events venue.

The church is still the focus for a worshipping community which include residents of the Great Hospital and the nearby residents of Bishopgate. 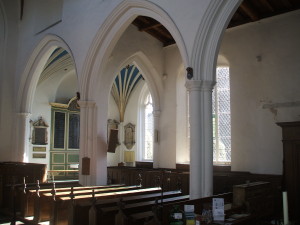 The parish church of St Helen is unique, being a church within a church. The part currently used for worship is the central area of a much larger church building, extending to the East and to the West. When it was built it was one of the grandest church buildings in Norwich.
The West end was built as an infirmary, linked through an open arch with the church itself. To the East, behind the wall currently host to a large painting of the Transfiguration (the Raphael original is in the Vatican) was a large chancel. At the Reformation in the 16th Century, both East and West ends were walled off and converted to ward accommodation for residents of the Great Hospital. Men were housed in the West end, and the women at the East.

As a consequence, the internal appearance of St Helen’s is unusual: The radical changes of the 16th Century result in an almost square church. 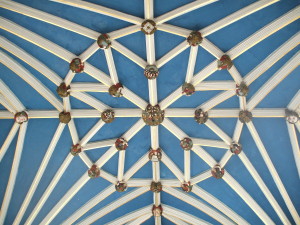 There is a central pulpit (very typical of reformation churches) surrounded by box pews thought to be late 17th Century. In most churches, this
arrangement was changed back to a central altar and side pulpit during the 19th Century, St Helen’s is an unusual remnant of this part of Church of England history. Before the Reformation, there were at least three altars in use. The only one now is in what was a chantry chapel to the South of the church. The altar itself is a Stuart carved wooden table with a Georgian wooden creed board behind it. To the side of the altar, there is a carved stone piscina (a small basin used for rinsing the altar vessels), confirmation that there has always been an altar in this position.
The Porch is the oldest part of the church, dating from 1251. 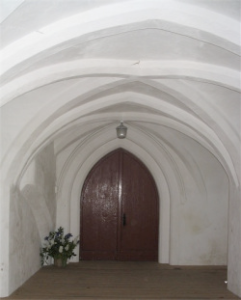 A visit to the church is rewarded on discovery of the ancient carved pews, stone roof bosses, lierne vaulting and ancient tomb slabs in the floor.

Church Services
Regular St Helen’s Church services are on Sundays at 10.30am (Common Worship). On these occasions, the worship is in Communion services. On a fifth Sunday at 10.30am, the service is Songs of Praise.
Special seasonal services are also held regularly, as appropriate.
Visitors are always welcome.